Mental Health Awareness Month: The Most Common Types of Depression in Men Though depression may be isolating, if you’re experiencing a form of the mood disorder, you’re far from alone. According to the National Institute of Mental Health, 17.3 million American adults have had at least one major episode of depression and out of that chunk of the population, 6.3 million were men.

As part of Mental Health Awareness Month, we have partnered with Hims and compiled a guide of the most common types of depression in men.

Also referred to as dysthymic disorder, persistent depressive disorder impacts 1.5% of American adults. Though symptoms may last for two or more years, it’s not as intense as major depression.

In their lifetimes, 4.4% of American adults experience bipolar disorder. Though it’s a mood disorder that may lead to depressive episodes, it’s not medically categorized as a form of depression. Bipolar disorder manifests as drastic changes in mood. An individual diagnosed with this mood disorder may experience manic periods of elevated mood and energy followed by episodes of depression.

Here are a few symptoms associated with depression:

Consistent feelings of dreariness and despair 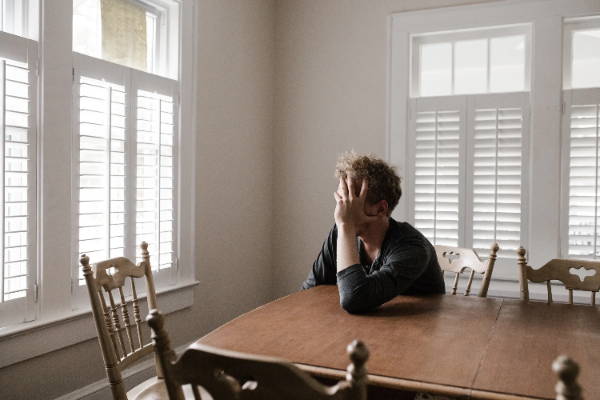 How To Be Proactive About Your Mental Health

Approximately 6 million American adults who have depression don’t receive treatment. Unfortunately, compared to women, men tend to avoid getting treatment for their mental health issues and are 3.56 times likelier to commit suicide.

In addition, particularly in men under the age of 40, depression has been linked to erectile dysfunction. A crucial part to combating mental health issues is encouraging an honest conversation about how depression manifests in our daily lives.

If you think you’re experiencing symptoms of a mood disorder, you can reach out to a psychiatrist to figure out a strategy on how to move forward.

Alcohol is a depressant, which means it can create or aggravate feelings of depression, as well as other mental health disorders. We recommend avoiding alcohol and choosing a non alcoholic option to keep your mind healthy and happy.